Asymptote published a review on Alisa Ganieva’s Bride and Groom by Hannah Weber, a writer, editor, and Ph.D. candidate from UK.
"Yes, Ganieva is touted as the first Dagestani author to appear in English—this is truly a cause for celebration! But let that not overshadow her merits as a writer: that she is unafraid of depicting alienated, imperfect people whose purpose is to expose those universal paradoxes we hold dear. Bride and Groom is funny and perceptive and concept-dense, which proves to be a winning combination. I want more" 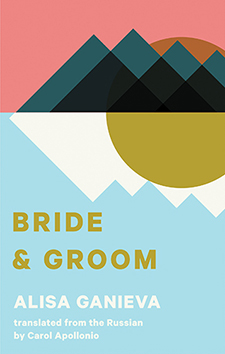 One has the sense that the spirit of Jane Austen lives on in Alisa Ganieva’s Bride and Groom. A runner-up for the Russian Booker Prize and her second novel to appear in Carol Apollonio’s English translation, it has the kind of tenderness, tradition, and subtlety that Austen surely would have recognized. Written using alternating viewpoints, the story follows two young Russians returning home from Moscow to be subsumed within the political, religious, and family intrigues of their hometown.

Patya is an Elizabeth Bennet for her time. After a year spent shuffling papers in a Moscow courthouse, she returns to her family in Dagestan, an ethnically diverse, Muslim-majority region in Russia’s south, and is immediately confronted with the mammoth task of marrying before she becomes “a little long in the tooth for a bride.” Marat is a lawyer working on a high-profile, horribly familiar case concerning the government-sanctioned murder of a human rights activist. Marat’s mother, a woman of true Mrs Bennet proportions, has different priorities: she has chosen a date for her son’s wedding and squandered the family’s savings on a banquet hall. All they need is a bride—but not to worry, she’s made a list of eligible bachelorettes.

Ganieva excels in dismantling the romanticism long favored in the Caucasus, trading elegiac recollections of snowcapped mountains for the intimacy of family spats. While Patya and Marat circle slowly towards each other, a number of political and religious feuds play out around them. Everyone from the local policemen to a reformed prostitute make faux-naif pronouncements on religion and the growth of extremism. Politics is hardly separable from faith as two opposing mosques do battle over influence. Meanwhile, a local celebrity, Khalilbek, has been mysteriously jailed over accusations of corruption (among other things). The cast of supporting characters includes an ancient grandmother spouting fables, a muscly suitor who runs the local nationalist youth group, a clan of redheads nicknamed “The Red Army,” and Rusik-the-Nail, whose greatest sin is dancing the tango and who meets his end wandering the city wearing a placard that exclaims: “I’m an atheist!”

While the drawing room comedy can sometimes seem isolated, it is not without consideration of Dagestan’s position in broader Russian society. Ganieva’s first book, Salaam, Dalgat!, saw her criticized for failing to paint her homeland in a flattering light; this time she turns her critical eye onto how the capital views the Russian Caucasus. When confronted with a Muscovite’s patronizing views, Patya shoots back:


“It was in the nineties . . . You won’t believe it, I was a Russian officer, but I sympathized with the natives, their love of freedom.”
“You must be mixing up the nineteen-nineties with the nineteenth century,” I laughed. What a bullshitter.
She delivers a picture of a central-peripheral dynamic that is familiar to many, yet no less odious to witness:


“You’re sitting there giggling, but right here and now you have the opportunity to convey the hopes and dreams of the Caucasian people to the Russian elite,” he murmured. [ . . . ]

“The hopes and dreams of the Caucasian people? They’re no different from what everyone else wants. A functioning system.”
Patya’s self-awareness and acerbic humour make her a heroine to believe in, or even conspire with. Her reading of men is typically sceptical or dismissive: “I had a brief fantasy of tipping him over with my hand, like a toppled chess piece.” She frequently laments the fate of her female peers who became “completely domesticated,” and does not avert her gaze when it comes to the issue of subjugated women in Dagestan. The women in the novel appear to walk a razor-thin line—be seen in the wrong cafe with a man and your reputation will be ruined, but don a headscarf and stay indoors and you’ll be suspected of terrorism.

With his eager mother in tow, Marat visits the Shakovs, whose daughter Sabrina is yet to be married and is therefore on the dreaded list of eligible women. The dinner table conversation quickly turns to rumors of a woman who was dragged out of her house to be interrogated (and worse) on suspicion of terrorism:


“What are you talking about, Papa? She was just a woman in a niqab,” Sabrina corrected him.

“There’s no such thing as ‘just’ a girl in a niqab around here.” Shakhov struck the table with his fist. “They are all future terrorists.”
The precarious situation of women, particularly devout Muslims, is just one of the politically salient yet painfully personal themes that Ganieva tackles in Bride and Groom.

But back to Austen: while tackling a range of hot button issues, there is something remarkable about an author who can capture that absurd and intimate family dynamic with such ease. Ganieva proves herself to be a master of social observation, capable of elucidating that elusive knowing laugh. As Marat takes his leave of the failed dinner party, Shakhov tells him that his own wife, a cardiologist, cared so little about him that she missed his own heart attack:


“You never had a heart attack,” his wife retorted coldly.
“What do you mean? I was at death’s door!”
“He doesn’t get enough attention,” commented Shakhov’s wife under her breath.
It takes a skilled translator to summon a distant world in such detail without flattening it, but Carol Apollonio has done beautifully. By leaving a handful of words untranslated—foods, traditions, frustrated appeals to God—she endows the text with more meaning than if they had been simplified into English. When Ganieva lovingly dresses the table with local foods, the Anglophone reader does not need to know the ingredients—foreign foods smell just as sweet, if not sweeter. Apollonio has transformed not just the Russian text but also the whole multilingual existence of Dagestan, with its many dialects and “small languages” into something familiar and accessible. While her translation of Ganieva’s The Mountain and the Wall included a lexicon of untranslated words, Bride and Groom suffers no losses for being without it.

Fortune-tellers and prisoners, Sufis and Wahhabis, family gossips and mythologizers—the novel harnesses all the concerns of a community digging in its heels against religious extremism. Bride and Groom is much more than the simple love story its title expounds. But while the characters are busy skating out an intricate drama, there is a powerful dynamic flowing underneath—Sufism.

Sufism is a form of Islam that involves a total dedication to Allah, strict abstinence from wealth, fame, and pleasure, and a kind of withdrawal from public life in favor of solitary worship. Sufism is a truth-seeking practice; it is said that there can be no Sufism without knowledge. Similar to other monastic faiths, it involves types of physical meditation and prayer. Bride and Groom is littered with Sufi symbols—wine, hair, the sea—as Ganieva explains in the novel’s postscript.

One character in particular stands out as a vessel for Sufi teaching. Khalilbek, who will be familiar to anyone who has read Ganieva’s The Mountain and the Wall, is alternately portrayed as a villain and a saint. Ganieva retrospectively likens him to Khidr, a wise and immortal servant of God. Many stories are attributed to Khidr, including one where Moses condemns him for killing a child, but Khidr responds that the child was destined to be a cruel unbeliever. Like Khidr, Khalilbek serves to show that many seemingly malicious actions are, in fact, merciful. True to the Sufi ideals of knowledge, Khalilbek is portrayed as sagacious and omnipotent:


He had a finger in every pie and knew the details of the most minor matters; at the same time, he was behind all major shifts in power, missing persons cases, and fateful decisions.
Like a kind of Leviathan, it is this peculiar stranger in the community’s midst who has the licence to make change and disrupt the course of history. Of course, what appears to some as omnipotence, appears to others as manifest corruption. The reader, too, is left to grapple with this ambiguity.

Perhaps the best-known image of Sufism in the West is a whirling dervish, spinning gracefully in place, head and felt cap tilted slightly, symbolizing the tombstone of his ego. As the story’s bride and groom spin ever so slowly closer to their own union, so the dervish spirals upward toward knowledge and unity with God. Those acquainted with the Sufi poet Rumi may recall this idea; “Our death is our wedding with eternity,” or as Marat’s fortune-teller suggests, “You are to die before your death.” The Sufi concept of a reunification with God appears alternately as a point, the sea, or simply everything at once.

Over-commitment to this underlying theme means the book’s ending lacks the generosity of spirit of its earlier chapters. We are sometimes unable to follow the motives of the bride and groom, who are last seen apart from each other at the edge of the Caspian Sea. Ganieva does not penetrate their inner world, but rushes toward the end. Nevertheless, if this makes it an imperfect novel, the imperfection manages to feel true to the mess of real life against the perfect, spinning calm of Sufism—if only we suspend our disbelief.

After two previous novels, Ganieva’s interest in dissecting the customs of her homeland has clearly not abated. It is precisely her lack of romanticism that makes Dagestan so beguiling in Bride and Groom; she is engaged in an extended process of mythologizing the present state of Dagestan, rather than eulogizing its past. There is forgiveness here, a comic beginning, and a romance of sorts, but the abiding feeling is one that speaks to the human connection with something greater.

The abundance of characters does not clutter the stage, nor do the variety of contradictory values, religious practices, or versions of morality and law. Every shotgun on the wall is fired at the right time. The beauty of Bride and Groom is that it never feels overdrawn—it is the poetry of life in uncluttered prose. Ganieva artfully balances an array of polemical topics, narrative twists, and deeply spiritual concerns, which are laudably translated by Apollonio into a youthful, energetic voice that feels true to the author.

Bride and Groom will appeal to anyone interested in Russia’s peripheries, the threat of extremism, or how we grapple with corruption after the fall of Soviet communism. But more importantly, it speaks to the greater themes of family, faith, and our place in the world. While regional peculiarities are indeed interesting to the outsider, it is a failing of Western writers and readers to remain closed to the idea that an author from the post-communist world should craft a work not wholly given over to politics and ideology. Yes, Ganieva is touted as the first Dagestani author to appear in English—this is truly a cause for celebration! But let that not overshadow her merits as a writer: that she is unafraid of depicting alienated, imperfect people whose purpose is to expose those universal paradoxes we hold dear. Bride and Groom is funny and perceptive and concept-dense, which proves to be a winning combination. I want more.